How is OJ SIMPSON'S Case relevant to The Tragedy of Macbeth 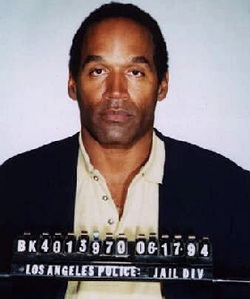 The most popular person in todays modern world that does fit the Macbeth mold is probably O.J. Simpson.  O.J. has been proven guilty of the crime of murder.  He has supposedly killed his wife, Nicole Brown.  Just like the lion king, O.J simpson’s case has a modern connection to the Tragedy of Macbeth.

O.J.  has two children.  The mother of the children usually gets custody of the kids in divorce settlements.  Perhaps O.J. loved his children so much that he could not bear to loose them.  O.J. killed for his own needs and desires.  He may of had ambitions and goals for his children which were being taken away from him.
O.J.'s ambition to not loose his children, and probably half of his money led him to selfishness, greed, and hopelessness, leading to the death of innocent people.

The divorce between O.J. and Nicole was not settled. Nicole was dating another man ,who was also murdered.  Since the divorce was not clear, this dating could be looked upon as an affair.  Perhaps O.J. was jealous of this man.  Maybe, out of selfishness, greed and jealousy O.J. went to far when he decided to murder his wife.

O.J. has lost a lot of money, friends and trust. Not only has he lost most of his trust with friends and family, he has also lost trust and respect from the public and his fans.  Faith and trust is very important in life, and it seems as though  O.J. fell prey to ambition, greed and jealousy, just like Macbeth. Having an ambition can be very dangerous to others. Take this case for example, innocent people were murdered, and at the end of the day, O.J. lost his money, friends, and lots of fans.Was it really worth it?